A less discussed but very compelling side of VR


I've been spending a chunk of time working on virtual reality prototypes and found something pretty unexpected about the format.  Forgive me while I just geek out for a second.

When gamers think VR, they tend to immediately picture first person views inside environments both vast or cramped.  Cockpits, ship interiors, dungeons... you know, the classic standbys we've dreamed of immersing ourselves in for decades.  I expect we'll see loads of those environments (and I'm as psyched as the next geek about that!) but there's a facet to VR that doesn't really fit that mold.


Let me back up a sec.  There's this Marcus Fenix statue in the Epic office.  I can't express enough how ridiculously detailed and lifelike that statue is... it's simply beyond nutty.  When it came into the office after E3 years ago we were all just aghast at the quality of it, we would lean in really close to the head and stare at the detail of the eyes, eyebrows, skin, hair, etc... and it was hellaciously strange.  It's like any second he's going to go "BOO!" and scare the shit out of you, he's so lifelike.  It's like the "truest" form of that character.  Being close to something in VR can easily feel like that, and it doesn't even require the levels of detailing to achieve that sense.  An item is in your space, you're equally in its space, and that's enough. 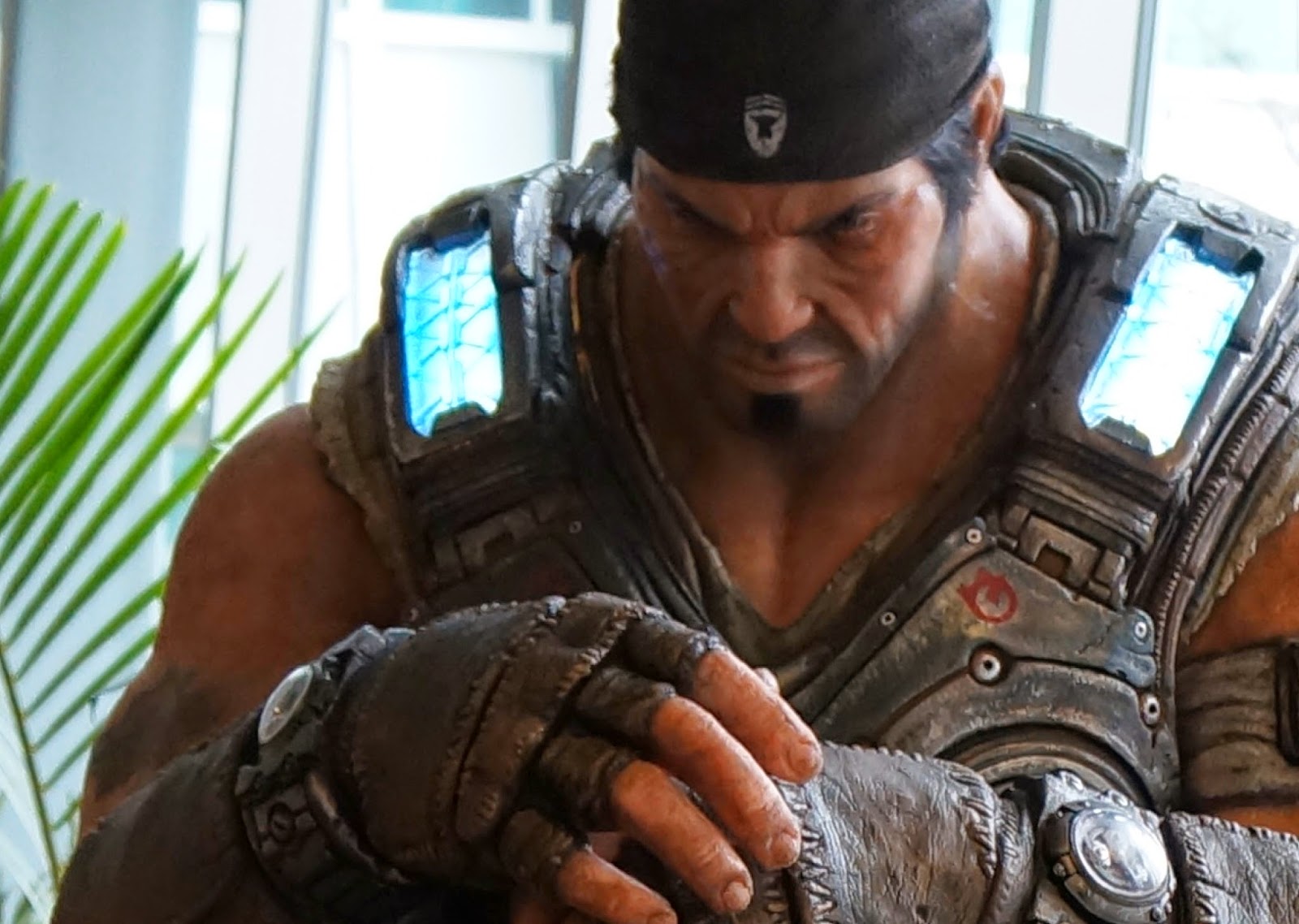 It's even a little hard to put a name on what I'm getting at, but it's this... It's not always about the environment you're in, it's about what's in your environment.  It's about an a object in front of you to investigate and manipulate.  Even in a boring virtual room I can drop in a model I've seen a billion times on a screen and am very familiar with, but when it's there in front of you it's like seeing it for the first time, and this time "for real".  Stand in a room with a life-size Samus, Ryu, Minecraft dude, or a 5 foot tall Mario and it's quite a shift in how you view those well worn characters.  Things we stopped "seeing" as jaded gamers can be fresh again.

Something you don't get with most gaming is that sense of personal space.  It never really felt like you were "there" before, so you didn't care if you were awkwardly standing three inches from another object.  In VR it's a different story.  It can be uncomfortable yet interesting that a "thing" is close enough that it doesn't entirely fit in your field of view.  If it's a character specifically, your brain assigns it all kinds of anthropomorphic characteristics.  You can suddenly feel like you're being invasive or vulnerable based on proximity alone.

I modeled a robot this week and dropped him in a map, but it wasn't until it was in my 'Danger Room' VR map and I walked up to him that I really "met him" and could evaluate what I had created.  For 3D artists it's a lot like how we used to hit "render" and wait for the authentic version to be born.

One of the things I appreciate most about being in a VR world is how much scale affects the experience.  I don't just mean running around in a cathedral sized chamber or tiny crawlspace either, again, it's about the objects around you.  We have a powerful new tool to affect how something "feels" with relatively minor adjustments in overall size.  When I walked up to my robot guy, a size difference of just 10% entirely changed my perception of the creature.  One second he's some target droid peon, the next second he's taller than me and looks like he'd rip me in half without so much as noticing.  A couple inches in the height of a character's eyes as it relates to the player is a powerful thing.

We used to be able to fudge scale all over the place; it's a standard part of the smoke and mirrors toolkit to have something like, "hey, that gun on the ground is 3 times the size it is when it's in your hand, but the player doesn't notice".  Those days are firmly in the past with VR.  Walk up to a 9 foot long weapon on the ground and it absolutely looks ridiculous.

But regardless of my mech dude's scale, it's just interesting to be in a room with this thing.  It's fun to just walk around it, study it, imagine it tracking me, imagine what gameplay would fall out of interacting with this beast.


If you have an Oculus Rift DK1, it's not really fully "there" with what I'm talking about; those are pretty rough units as you know (but they still pull it off sometimes).  The effect is ridiculously better once positional head tracking is in place though; that's something that really set in with the GDC hands-on demo of the next DK2 units.  The ability to stoop down a bit or lean to the sides and get the ultimate sense of parallax as you move your head around was something I really wasn't prepared for.  It just "works" for your brain, and instinctively reinforces curiosity and that sense of feeling out your surroundings.  I was even about to prototype some awful mouse driven head location offset so I could experiment with the possibilities of "snooping around" an object even before we have the new kits.  (If someone beats me to it, send me that code will ya! ;)


So what sort of games is all this useful for?  Well, put simply, the unexpected.  The last concept you'd ever consider designing for a VR game might be something like a virtual cardgame or boardgame, a small 3D dungeon on a table, manipulating a complex HellRaiser puzzle cube in front of you, playing with a virtual pet, etc... but there's a lot to be said for those concepts.  Consider how some people don't deal with motion sickness well and there's even more to be said for a more contained "virtual toy" experience like that (even though I'm strongly of the opinion that newer tech almost entirely wipes out those negative experiences).

Consider, if the table in front of you could project a realistic hologram in the airspace over it, what would you create for that format, games or otherwise?  Odds are, that's equally compelling in VR.

Contrary to many, I haven't really been all that interested in controllers that mimic your motion or try to bring you into the game... I generally expect I'll be sitting in a chair, and that's not the most exciting thing to try and have a game replicate.  I like the familiarity of a 360 controller, dual sticks, buttons with immediate response, not having to hunt for a keyboard, etc...  the experience of a modern VR headset is unique enough, I don't need to complicate it with some sort of Kinect type miming of what I want to do.  But, for a game that's more contained inside my forward view, I kind of backpedal on that issue and suddenly I get excited about the possibilities of true presence and 1:1 control schemes.

It's all another aspect of what's so intriguing about the future with VR.  In spite of random claims about what "it's only good for", for every perceived limitation that comes up there's something else unexpectedly promising to balance it out.  These are the parameters that can shape a huge possibility space of new designs and gameplay conventions waiting to become our new "normal".  Games that take advantage of what the format does well and pull off the unexpected can set a whole new generation of gaming trends.  That's what has me geeking out.


As always, thanks so much for reading!