My tactics for NimbleBit's game Capitals

If you enjoy word games, indeed if you've ever enjoyed a word game, you should check this bad boy out.  It's a great balance between a word game, and a hex based war game.  I constantly have about 6 games going at once.  I'm addicted to it, no way around it, it's just a fantastic clean little game! 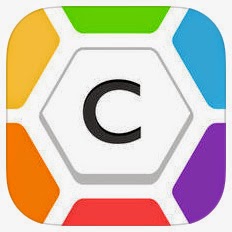 A quick summary!  In a nutshell, you have a hex based board, with two colored land masses for the two players.  Along the "borders" there are tiles with letters on them.  Use the letters on YOUR border, and you expand your kingdom, often pushing into the enemy territory.  The goal is to shove your border all the way into the enemy's capital, which has their little icon in it.  It's really straightforward to understand the basics by the time you've taken a move or two. 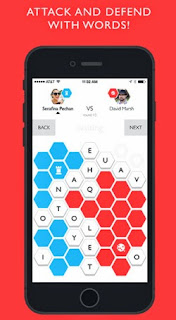 Since I've been enjoying the heck out of it, and it's multiplayer, I figured I'd try to help foster a little community love for it by posting a bit about my tactics with the game.  These are just my opinions, and I imagine people will have all kinds of personal playstyles of course.  If you're a new player, these might help that first handful of games go easier... and if you're playing another new player with these tips in mind, you're likely to hand them their buttocks.

1) The biggest word is not the best move

This is what sets the game apart for me.  There are times (lots of times in fact) when you can put together an amazing 12 letter word from the tiles on the board, and immediately after that get smashed in the face by the word "CAT" because none of your 12 letters were actually important real estate.  It's a balance of finding a good word, but also finding the word that will push your borders in a good direction.

Keep your eye on the goal, the enemy's capital.  A good way to facilitate this is to select the handful of your border tiles that would really smash the enemy, and only then look at the top of the screen and try to find words you can make from those tiles.  Letters on the back of your kingdom, or letters that are only in enemy territory, they can be used, but they don't actually accomplish much.  Generally, the main purpose of those ancillary letters is to allow those few important attack tiles to be used.

Remember, select your best letters according to position, THEN try to make a word from that.

2) Go for that extra turn

When you use a tile that is right next to your enemy's capital, you take their capital, yaaaay! You didn't win quite yet, but you did earn an extra move.  Getting that extra move, getting to go twice in a row, that should be your ultimate goal.  Play ridiculously aggressively if it means making that happen.  With two moves in a row you absolutely mangle any enemy stronghold.

After you play your second turn, if there are any remaining enemy owned hexes, that will become the new enemy base.  That second free turn is your chance to mop up the countryside.  You only get one shot at that blitzkrieg, remember rule one here!

The only thing more important that pushing aggressively at the enemy's capital and trying to get that extra move, is never ever EVER leave your capital open.  If there are letters adjacent to your capital that can be chained together by the enemy, you have absolutely got to use those letters and reclaim the immediate "moat" around your home base.

I almost hesitate to post this one because it's so important to how I play.  It's almost downright abusive to understand this when your opponent doesn't.  But, here goes.  Cat leaving the bag...

To me, the most important aspect of the first few moves is who makes first contact.  Put simply, you DON'T want to be the person that connects the two kingdoms first.  Here's an example. 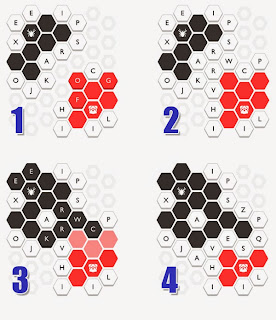 I'm the black spider, in these shots.  At first (frame 1) the gulf is intact, and the enemy plays "FOG" which connects our two kingdoms.  Now (in frame 2) we both now have 7 tiles, and it all seems pretty even steven.  It's not.  For all intents and purposes, THIS is the first meaningful turn of the game.  Make a single aggressive move blasting through the newly shared border (in frame 3 I play the word "WRECKER"), and end up with a huge advantage and the enemy reeling back on their heels.

When both players start playing towards this logic though, you can end up with some hilarious opening dances going on as players decide where best to connect.

Remember, try to avoid being the one to connect your lands.  (Now my win streaks will crawl to a halt, but at least I can sleep soundly)

When you're in the thick of it, it's easy to keep just shoving back and forth down the middle of the map, repeatedly trading a space or two with the enemy.  Usually though, there's a long chain of letters down the sides of the field, and putting them together can dramatically swing the tide of a game.  Think of these attacks as your big right hooks when the center area gets all "jabby".

Sometimes you might isolate off some little enemy hex in a corner of the field.  It's worth tying up that lose end when you can, because they can sometimes launch aggressive attacks from those.  Just because it's not connected to their capital, doesn't mean it's not potentially lethal.

Conversely, try to keep control of your loose hexes and launch those great attacks from them that can act like a dagger through the center of the enemy field.

7) Buy a custom icon and color

First, it supports the devs, who are truly awesome people!  The game is free, it's not predatory and spammy, it doesn't throw ads at you, it's ridiculously generous to the point you can play a TON without ever spending a dime...  take a moment and show that you appreciate this model.

As an added benefit, customizing your icon and color makes it WAY easier in your games to remember which side you are.  Without a personalized color and icon, I often see (and have done!), moves where one player forgets who they are.  They end up making some theoretically awesome word, but it's all using tiles that were enemy controlled, so it's a completely wasted turn.  That's not good.  Go spend a buck and make yourself look awesome!!!